skip to main | skip to sidebar

A Follow-up To Blob Siegel’s Prize-Getting

Didn’t Siegel get some prize or whatever, a while back? Or am I thinking of somebody else?

Yesterday he was ‘considering’ a new film that deals with the speech problems of King George VI, and Colin Firth, the lead actor in the picture, was there to explain. He did so quite well, despite the fact that Siegel was more interested in the king being some sort of out-of-date figure, or whatever.

Faced with yet another Brit accent on his hands (Firth, an excellent actor, full of integrity and depth), the always too-cool Siegel elects to come across as a street-smart American. He is more comfortable dumbing down the subject – not because of any (possible) mandate from Viv Schill-er, but because that’s what he’s capable of. That’s what he DOES. So much for coming off as an intellectual, so as to create trust and maintaining the ‘quiet elitism’ that is so vital to NPR’s reputation!

I’ve lived for some time in the UK and believe me, the media and pop culture there put upper-class-ism/elitism in its place MUCH more than in the US.

In his discourse, Firth was simply displaying the sort of standard intelligence that a grown-up in public life needs in order to be credible, while Siegel, with his limited pursed-lipped tools, is used to lording-it over his interviewees, whether it be thinly-disguised condescension when dealing with a ‘commoner’, or a ‘you don’t intimidate me one bit’ ego-confidence when dealing with some head of state.

The term ‘middlebrow' used to be widely employed to pigeonhole poseurs like Siegel, where mere iron-assed longevity can pass as implied quality and trustworthiness. Well, I’d say he and his kind (i.e. Gjelten and other ‘heavyweights’ at NPR News), are, shall we say, ‘lower middlebrow’. And there’s the all-important shill-factor. As Voltaire and company proved that the Enlightenment needed publicists, so Siegel & Corp. are vital to publicizing whatever it is that NPR ‘stands’ for... (Fill in the blank, mostly under ‘Propaganda’.)

If H.L. Mencken were around, he’d hound such phenomena as ‘Siegelism’ for the disgraceful thing that it is, until they fired Siegel’s inflated ass – and not because of any bozo issues like those involved in Juangate, either. Mencken hung out at the foundation of things, not at some fashionable sushi bar.

When delivering his prize-win speech, I would guess that, like Paul Wolfowitz, Siegel probably punched it up with genial anecdotes and crackerbarrel wisdom, so as to display his ‘real’ talents as a multi-purpose media guy of the people (besides being a ‘really neat guy’, and all that), but also like Paul, any smugness passing as humor always betrays a gloat factor.

Radio being the instantly-disposable medium that it is, despite archiving on the net, Siegel’s type of ersatz intellectualism thankfully becomes disposable and quickly forgotten (I shall continue to TRY and forget, anyway…). Thus, he fits in perfectly with NPR’s increasing flakiness and irrelevance.

(I noticed that just this morning, NPR got up the courage to finally tell America about Bradley Manning and the ‘Lady Gaga CD’…)

I keep coming back to Mike Wallace’s famous putdown of NPR, in which he had no intention of getting lost in the wilderness of National Public Radio. (Also a veiled putdown of former colleague Dan Schorr, I should think. Dan who…?) In spite of NPR News’ new standing (for nothing), the wilderness is more intact and denser than ever. 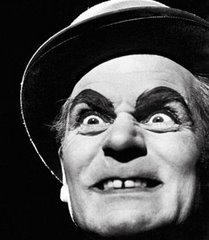 An Epic Wandering into the heart of what's shakin' - wherever and whenever the need to expostulate erupts...

My ART BLOG - under a DIFFERENT NAME!

Porter Melmoth
There's an awfully darn lot to yak about out there today. If I could just, just focus a little. You know, if I could just concentrate on a few subjects, that would be good. NPR pops up regularly here, but that's just a mere starting point. Cinema is infinitely more exciting and rewarding, so that's a good incentive to do more yakking about film. Paul Wolfowitz (remember him?) is deserving of mockery. Oh, and he should also be prosecuted for high crimes and misdemeanors. Still. Another starting point. And, don't forget: Chimpeach! Even though he's out of office. The time was never better. Oh, and I was just kidding about 'South Georgia and South Sandwich Islands' as a location point. I'm in the US, as if one couldn't tell! And yes, that's the great, late Lord Larry Olivier in that there profile photo, as the ever lovin' Archie Rice in 'The Entertainer', A Woodfall Production from 1960. Masterpiece photographer Lord Snowdon snapped this brilliant portrait of Larry in full character.